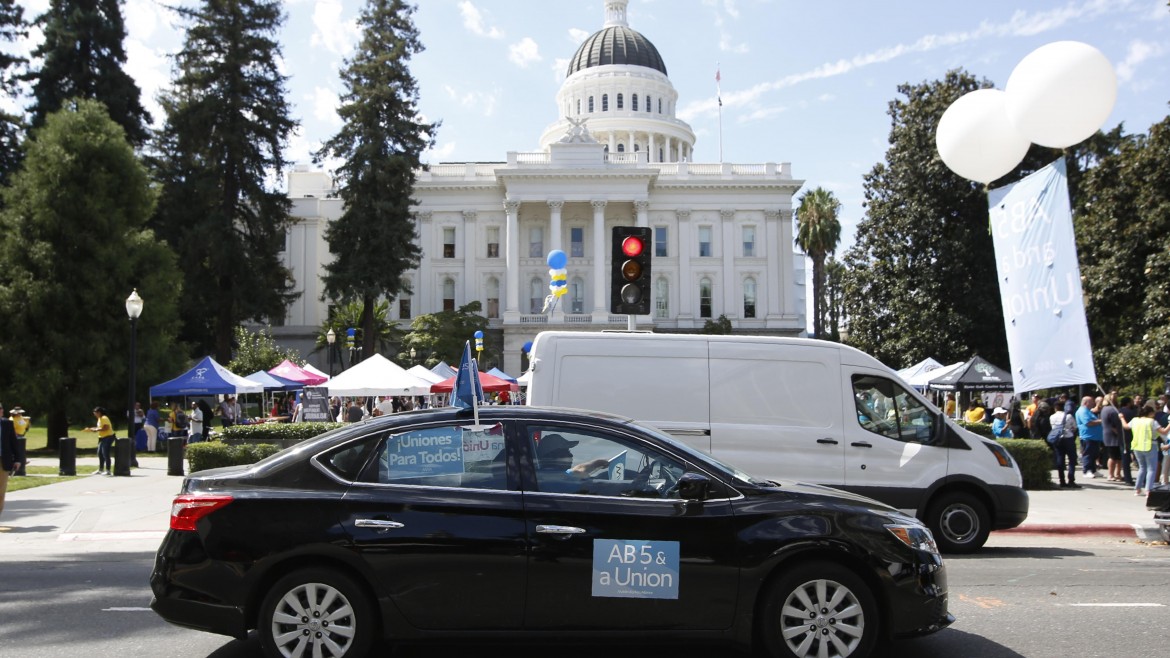 Uber Technologies Inc. failed to persuade a judge to shield its drivers from California’s gig-worker protection law while the company challenges the landmark measure in court. A federal judge in Los Angles rejected a request by Uber and Postmates Inc. to temporarily block enforcement of Assembly Bill 5, which aims to convert gig-economy workers from independent contractors to employees with benefits. Uber and Postmates didn’t ask the judge to shield other companies from the law.

U.S. District Judge Dolly M. Gee had signaled during a Feb. 7 hearing that she would deny the preliminary injunction sought by Uber and Postmates.

Gee concluded in an order posted Monday that the public interest weighs “in favor of permitting the state to enforce this legislation,” while acknowledging the companies’ claim that it poses “irreparable harm” for them.

The status of drivers for the companies is critical to the companies’ business models, and is also of keen interest to potential investors. Postmates said last February that it had filed confidentially for an initial public offering. Since then, the company hasn’t moved ahead publicly with an IPO.

In the next phase of the case the companies will try to convince Gee that A.B. 5 violates guarantees of equal protection under the federal and state constitutions. But the judge said in her ruling it’s unlikely that Uber and Postmates will prevail on the merits of their claims.California Attorney General Xavier Becerra argued the constitutional claims will fail because the state legislature has a prerogative to stop the gig economy’s exploitation of workers.

“State legislators had the opportunity to expand benefits for hundreds of thousands of independent workers in California, a step Uber has been advocating for and one that other states already have taken,” Uber said in a statement. “Instead, they passed A.B. 5 using a biased and overtly political process that ignored the voices of the workers most affected by the law and granted preferential treatment to an arbitrary group of industries.”

Postmates said the ruling is a disappointment for a pair of workers who joined the companies in filing the suit to “protect their flexibility and income.”

“As witnessed by truckers, freelance journalists, and countless other occupations, A.B. 5 is undercutting workers across the economy, and Postmates remains committed to the modernization of worker classification and worker protections,” the company said in an email.

Becerra’s office said it’s pleased with the ruling and “will continue to defend laws that are designed to protect workers and ensure fair labor and business practices.”

As multiple court battles play out, gig companies are working on other fronts to rein in the law. Uber, Lyft, Postmates, Instacart and DoorDash have pledged $110 million for a ballot measure to change A.B. 5.Signed by California Governor Gavin Newsom in September, A.B. 5 says workers can generally only be considered contractors if they perform duties outside the usual course of a company’s business. Uber filed its suit Dec. 30, two days before A.B. 5 took effect.The case is Olson v. State of California, 2:19-cv-10956, U.S. District Court, Central District of California (Los Angeles).