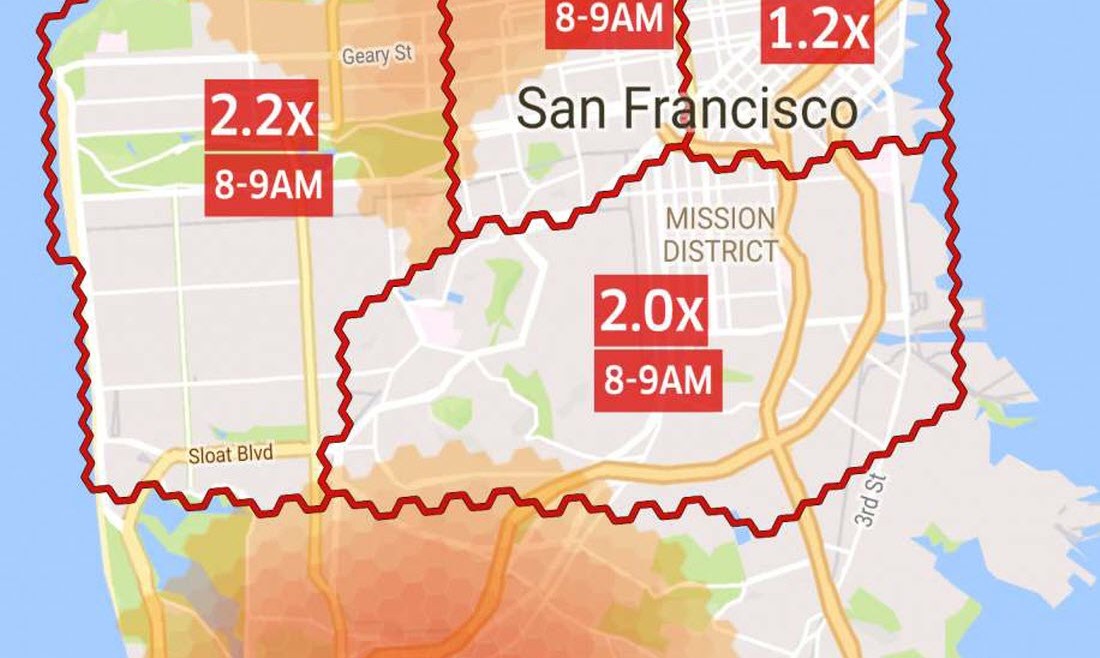 Step 4: I Focused on Surges and Boots

If you drive in a surge or boost area, you get extra money on top of your base fare. Here’s the difference between the two:

A surge is a region that is entirely determined by supply and demand. It will suddenly appear on the Uber map if the demand for drivers (by passengers) outweighs the supply of drivers in a specific area. Rates vary from 1.1 to 3.0.

Here’s an image of what a surge looks like: 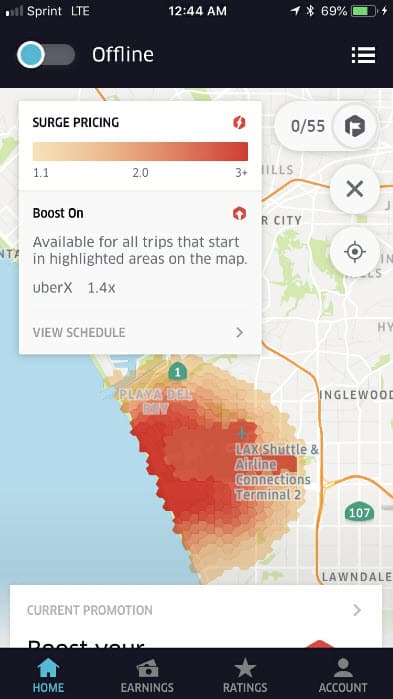 So as you can see, there’s a surge in the LAX area. This means that a lot of passengers need rides (high demand), but there aren’t enough drivers to meet this level of demand (low supply). Usually with a surge, the colors will appear light orange on the outside, and more reddish on the inner circle.

Therefore, you not only want to be in a surge area, but also aim to drive in a dark orange/red area. In addition to the higher surge rate in darker areas, your chances of getting a ride request will also increase because that’s where the demand is highest and the supply is lowest.

Here’s another important note about surges: they result from the imbalance of supply and demand, so when these two are “balanced” again, the surge will most likely “lighten” in color and then disappear. In other words, when Uber drivers see a surge on the map, they will most likely flock to it. But when that happens, suddenly the supply of drivers meets the demand from the passengers, and the surge will disappear. So this begs the question: should you chase surges?

Only chase surges if you are near a surge. As in, a couple of miles away, tops. Otherwise, don’t bother, because more than likely, by the time you reach the surge, other drivers will have beaten you there, the surge will disappear, and now you’ve wasted time and money chasing a surge that no longer exists. Now you might be thinking: what’s the point of all of this if I shouldn’t chase surges?

The overall takeaway is this: surges are essentially random. Yes, you can theoretically predict when the demand might be high (bars and clubs on a Saturday night, for instance) but it’s difficult to predict when the supply of drivers will be low. The idea is to drive in a surge area when you can, but don’t make it your primary focus.

A boost is a designated region that is predetermined by Uber. If you drive in said region, you’ll get a “boost” ranging from a 1.1 increase to a 1.7 increase (depending on your market). The boost starts and ends at certain times. For example, there might be a boost in downtown Los Angeles for a 1.1 increase from 4:00 pm to 7:00 pm.

The boost starts and ends at certain times. For example, there might be a boost in downtown Los Angeles for a 1.1 increase from 4:00 pm to 7:00 pm. So unlike a surge, a boost will stay in the specified region of the Uber map until it expires. It will not fluctuate like a surge either. For example, if a boost says the following: 1.5x from 1:00 am to 2:00 am, it will stay that way (the 1.5x rate won’t increase or decrease during that time frame). Now when 2:00 am rolls around, the boost might go up, down or disappear altogether, so check the Uber app for upcoming boosts.

Here’s how to do that: