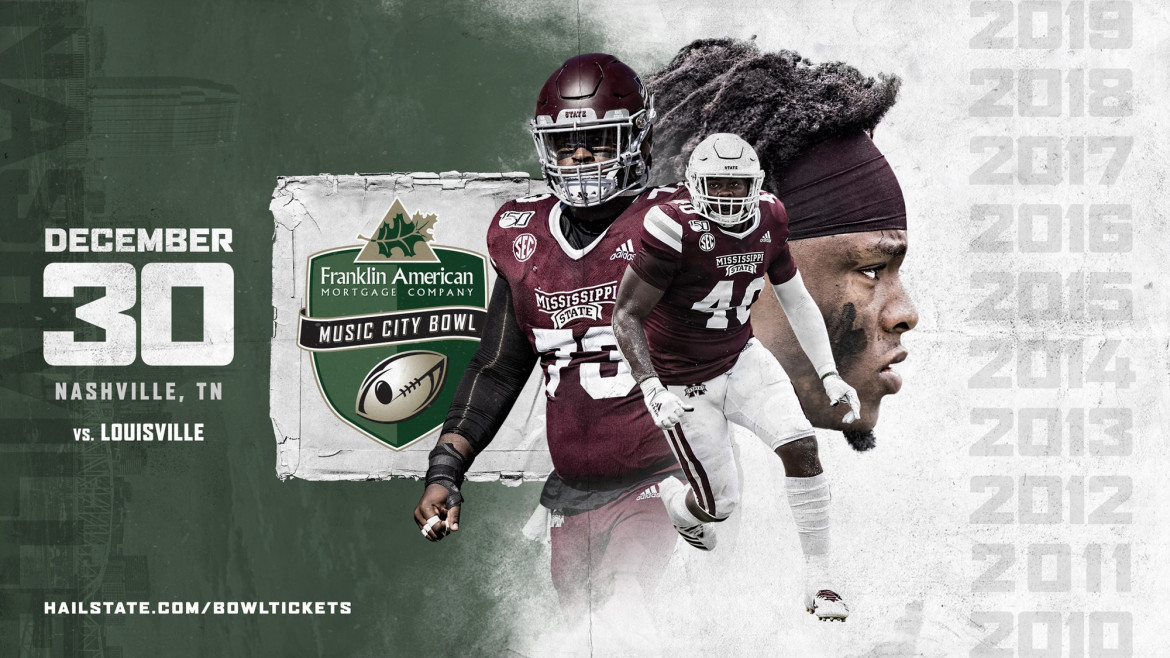 Louisville Takes It to Mississippi State in Music City Bowl

Louisville Cardinal fans were in full representation mode Monday night, on the eve of New Years Eve, at Nissan Stadium, Nashville, for the 22nd Franklin American Mortgage Music City Bowl. The sea of black and red in attendance was unavoidable. The Louisville Cardinals (8-5) scored 31 straight points, rallying from a 14-point deficit, to beat the Bulldogs of Mississippi State (6-7). The final score was 38-28. This was the first time in six tries, that the Cardinals were able to upend the cowbell shakers. The series is now tied at three.

A yard from scoring on the opening drive, the Cardinals fumbled it over to the Bulldogs’ linebacker core. The Bulldogs, then, went on a 99-yard, eight play drive, to take a 7-0 lead. Mississippi State added another long drive, of 80 yards, to go up 14-0, on a 3-yard TD run by Nick Gibson with a little over 10 minutes remaining in the second quarter. After that, it seemed as if the maroon and white that represented the SEC had disappeared.

Louisville quarterback, Micale Cunningham and his troops, turned on their switches. With a little trickeration–Cunningham, Tutu Atwell and Marshon Ford combined on a 33-yard touchdown pass to cut the lead in half. Ryan Chalifoux added a 31-yard field goal as the first half expired, to pull Louisville within four points. From then on, it was the Cards’ show. The Cardinals had four sacks and two fumble recoveries, returning one 31 yards for a touchdown by safety Khane Pass. They outgained the Bulldogs in total yards by 144. Cunningham put the Cards ahead to stay with a 24-yard TD pass to Devante Peete late in the third quarter. Cunningham added another touchdown pass to Ford early in the fourth for a 31-14 lead.

“We got down 14 points early in the game, and the kids didn’t flinch,” said Cardinal head man Scott Satterfield. “They kept playing. They kept battling. Next thing you know, you’re right back in the game. We grabbed the momentum and poured it on”.

Javian Hawkins led Louisville with 105 yards rushing, adding a touchdown. Atwell finished the game with nine catches for 147 yards, setting the single-season record with 1,276 receiving yards. Cunningham tossed the ball around for 279 yards and two touchdowns. He also, dashed for 81 more yards.

The Bulldogs go home having lost a bowl game in each of coach Joe Moorheads’ two seasons.

The future looks very bright for Satterfield’s second season, led by his high-powered offense, filled with so many playmakers.