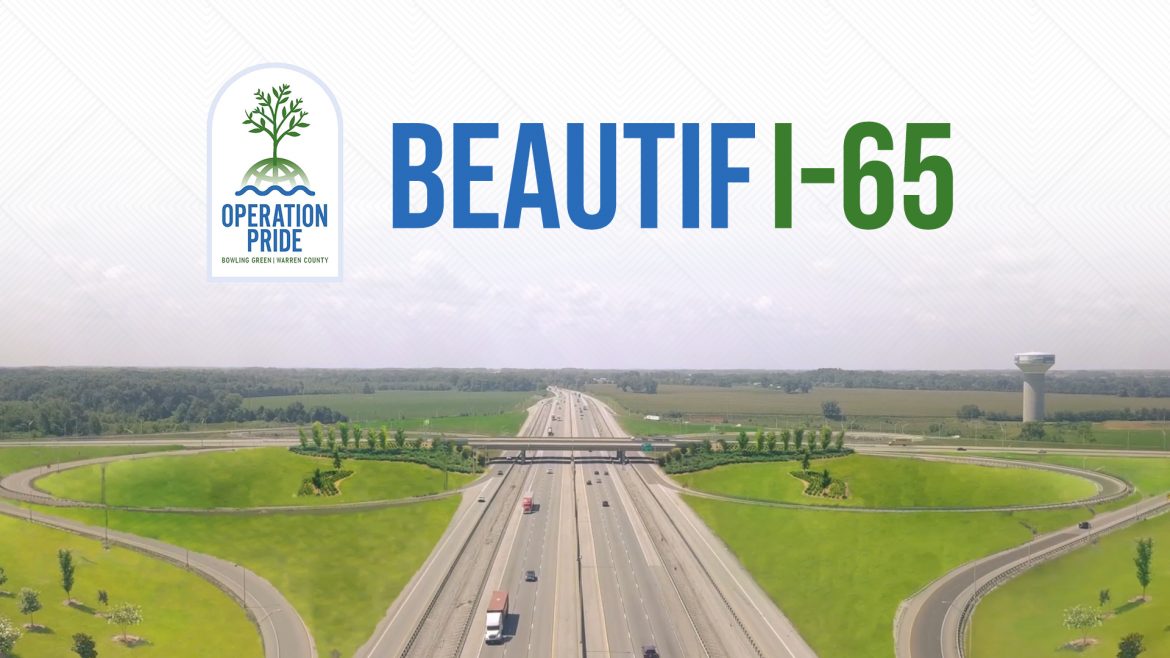 Bowling Green will be hard to miss for the millions of people who travel Interstate 65 annually if the BeautifI-65 project is built as expected later this year.

Under the direction of community beautification group Operation P.R.I.D.E., the effort will include four-plank wooden fencing, colorful flags and landscaping at exits 22, 26 and 28, as well as building two gateway signs at exits 20 and 30 for drivers coming to the city from the south and north.

The beautification effort has a strong economic development component to it, said former Bowling Green Mayor Johnny Webb, who is the Operation P.R.I.D.E. board chairman.

“It will encourage them to pull off and spend some money” in Bowling Green, Webb said of the 20 million vehicles that annually pass through the city on I-65.

The funds are being raised from numerous donors – “private people who love Bowling Green, believe in Bowling Green,” as Webb described them. Webb said Operation P.R.I.D.E. has raised about $1.6 million of the estimated $2.5 million cost.

Angie Alexieff, executive director of Operation P.R.I.D.E., said final designs for the project are expected to be completed in the next six to eight weeks.

“That should give us a (better) estimate of the cost of the project,” she said.

Webb said the group hopes to raise more than the $2.5 million in case costs are higher.

The state and federal governments have given preliminary approval for the project, and Alexieff said “we don’t have any reason to believe” the final design plans would be rejected.

Designs for the gateway signs at exits 20 and 30 call for raised stone planting beds with free-standing red letters that spell out BOWLING GREEN surrounded by colorful flags. The signs would be lit at night.

“It will be the most beautiful landscaping on I-65 from Chicago to Mobile, Ala.,” Alexieff said.

While the project was at one point expected to start with planting and construction this spring, the new timeline calls for it to start this fall.

What still must be worked out is the maintenance of the interchanges. Operation P.R.I.D.E. has proposed that maintenance costs – essentially mowing – be split three ways among Warren County, the Bowling Green Convention and Visitors Bureau and the city of Bowling Green.

While Operation P.R.I.D.E. has not formally asked for the funds, the issue was discussed at a recent city of Bowling Green retreat.

“It was not a definite yes or no” on chipping in for the costs, Bowling Green Mayor Bruce Wilkerson said. “There are some mixed opinions (and) we are still studying the issue.”

Webb said Operation P.R.I.D.E. hopes to get some maintenance funds from the state since it will no longer have to maintain the interchanges. The state currently just bush-hogs the areas, and the plan is to have them mowed for a more manicured look.

He said whatever the city and the other entities decide, “we’ll figure it out.”

But he said he views chipping in for the maintenance as a “no-brainer. We are saying ‘here’s a gift, will you maintain it.’ The money will come back to Bowling Green. … It’s an investment, not an expense.”